Augmented reality is a hot topic these days and I’ve been eager to explore its possibilities. Last month I attended a mixed reality meetup (Film 360 VR) at the offices of Meta in San Mateo. The evening provided fascinating insights into augmented reality via a panel discussion and hands-on demonstrations of Meta’s headsets. My only previous experience with mixed reality was (like so many other people) was through playing Pokémon during that fad last year. The Meta demonstration really opened my eyes to further possibilities but also made me realize the Pokémon had one thing correct: the best AR device is the one that you have with you.

To that end, I set off to find that best method of publishing AR content through mobile devices. My search quickly brought me to the website of Vuforia, the leading platform for AR content. Vuforia has been around for several years but just this month has been added as an option install into the Unity development engine v2017.2. My timing seemed impeccable!

I was able to get the Vuforia sample project up and running quickly in Unity following some easy to follow instructions on Vuforia’s site. After exporting to XCode on my MacBook Pro, I was able to connect my iPhone 6 Plus via a USB cable and transfer the sample app. I printed out the included sample images on my color printer (a grayscale image would work just as well if the documentation is correct), place them on my desk and view the sample content of colored teapots as shown below: 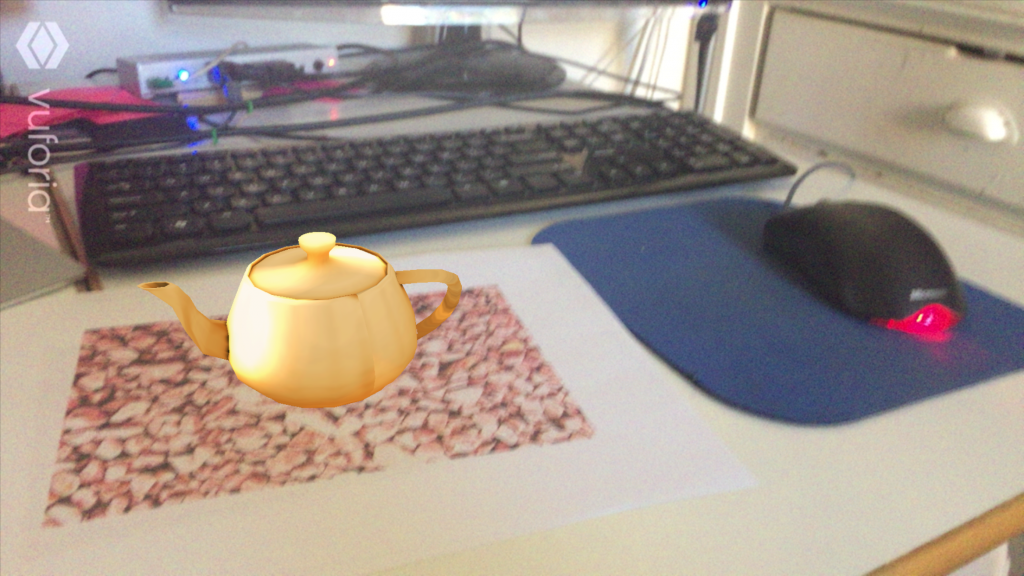 I was able to get two of the teapots (the gold one and the purple one) to display on my desktop but the third refused to cooperate (perhaps because the ink toner is running low on my printer.) So basically… success! Within an hour I was able to create a working augmented reality app.

My successful creation of the sample app spurred my desire to delve deeper and develop an app that that has an actual purpose and incorporates animated 3D graphics using custom image targets. As a Blender 3D artist, I naturally sought out a method to bring Blender models into Unity/Vuforia for the AR treatment. I found an excellent tutorial on BlenderNation by Widhi Muttaqien. Following Widhi’s instructions, I was able to model and animated a simple 3D character in Blender and bring the model, textures and animation into Unity to set up the Vuforia AR scene. Here’s a look at the animated character exported as a looping video from Blender:

Unfortunately, the tutorial was written in 2016 and the recent incorporation of Vuforia into Unity changed much of the UI related to Vuforia content. Nevertheless I was able to convert the instructions to the point where I could properly build the iPhone app in XCode. However, the animated 3D content (as well as the camera image) does not display when the app is run. Clearly, I have more work to do!

In a follow-up blog, I’ll explain the changes I made to enable the animated content to play correctly on my iPhone.